Please note that Australia currently has restrictions on posting items to Africa, South America, Asia, Canada and Austria. Mail deliveries to USA, UK and the rest of Europe will be delivered by sea mail. 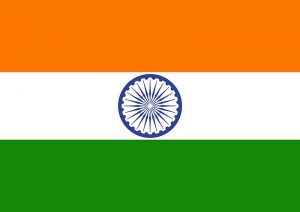 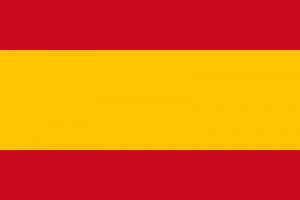 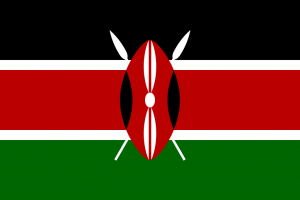 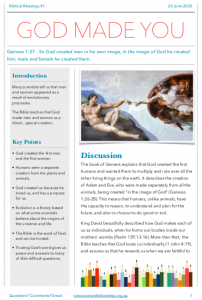 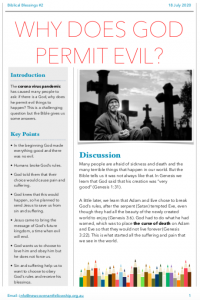 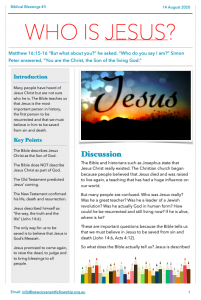 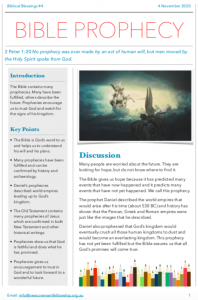 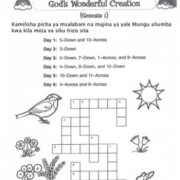 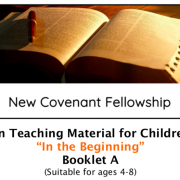 In the Beginning Booklet A

In the Beginning Booklet B 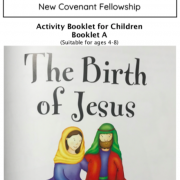 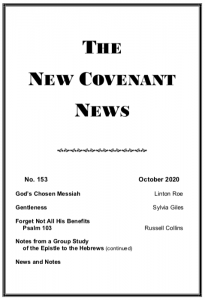 What is it? What does it mean?

This publication seeks to outline what the Bible says about some of life’s big questions and sets forward the basis for Christian beliefs and behaviour.

A concise, plain review of the Scripture teachings.

A booklet outlining the distinction between morals and ethics, and the absolute values and standards of God as set out for us in His Word, the Bible. The issues of permissiveness, divorce, homosexuality, abortion and evolution are discussed from a Scriptural and Christian standpoint.

Comfort for Those Who Sorrow

A look at some questions that may come to any who are in sorrow because someone dear to them has been taken away in death. Some traditional beliefs are considered against the words in the Bible. The words of Jesus Christ likening death with sleep are considered, together with the resurrection, the sure hope for all and the Heavenly promise.

Daniel The Prophet In The Latter Days

An explanation of the whole of Daniel’s wonderful visions: The Great Image and its Overthrow, The Four Beasts, Fight Between Ram and Goat, The “Little Horn”, Cleansing the Sanctuary, The Seventy “Weeks”, Messiah’s Glory, The 1260, 1290, 1335 and 2300 “Days”, Exposure of the Papacy, Condemned out of his Own Mouth, Great Mass of History Information covering more than 2,500 years, and proving Daniel to be a prophet for these Latter Days. Showing which of Daniel’s Prophecies have been fulfilled. Authorities are cited for Historical Statements, and the Information is made conveniently available by means of an Index.

Do The Dead Communicate?

A Scriptural examination of the philosophy of punishment for sin. Every Bible occurrence of Sheol, Hades, Gehenna, Lake of Fire and related terms explained.

In Defence of the Christian Life

An answer to those who doubt the value of Christianity.

Jesus Christ and the New Covenant

This publication outlines how Jesus’ death and resurrection have enabled a new covenant to be made between God and believers, with the offer of justification by faith and eternal life.

Modernism, Fundamentalism and the Bible

Showing the differences between the first two, and between them and the Bible.

Notes On Paul’s Letters to the Corinthians

This publication, completed in September 2018, is a compilation of Russell Collins’ thoughts on the two books, originally presented as a series of talks but here edited into a single text, downloadable in two parts.

Notes On Paul’s Letter to the Galatians

This publication gives the reader an in-depth understanding of the background to the writing of the letter and the key issues it addresses, especially those of the Apostle Paul’s authority, of salvation and of holiness.

Notes on the Book of Daniel

A detailed discussion of all of Daniel’s remarkable visions concerning the four world empires, three of which were future from Daniel’s time, the seventy weeks of prophecy fulfilled at the Lord Jesus’ first advent, the prophecies of the Papacy and its activities, and many other matters historical, religious and spiritual. Included in the discussion are many historical developments and events covering more than 2,500 years, revealing Daniel as a prophet clearly relevant to these latter days.

Notes on the Letter to the Romans

The Apostle Paul wrote his letter to the Church at Rome to a congregation with which he had not had any personal contact, but he wanted to visit them so that he would meet them and that they would get to know him.

Paul’s letter is a profound exposition of the Christian Gospel, and also a very practical treatise. It was probably written in the year 58 AD, and strove to bring about unity between Jews and Gentiles. The Church at Rome was at first formed mostly of Jewish believers who had been subsequently expelled from Rome by the Emperor Claudius. But when Claudius died in 54 AD, the new Emperor Nero invited the Jews to return.

In the meantime, the Church at Rome became predominantly Gentile, and when the Jewish believers returned, they found that Gentiles were running the Church. This situation led to tensions within the Church, a serious matter with which Paul sought to deal.

The social circumstances in the Rome of Paul’s day caused Paul great concern. Homosexuality was rife, there was considerable disregard for law and order, there was uncontrolled violence and crime, and much antisocial behaviour with children being disobedient to parents. Paul was particularly concerned that the Church did not become corrupted by the society in which the members lived.

Paul in his letter strove to bring before his converted Jewish and Gentile brethren the great doctrines of Christianity, and the proper relationship of the superseded Law of Moses to the teachings of Jesus Christ.

Notes on the Book of Zechariah

Zechariah was a priest and a prophet. The many visions and symbols in the book which bears his name are often difficult to understand and interpret, and the comments offered in these notes are intended to urge the reader to think about them and seek to understand them.

One God, One Lord, One Spirit

The Holy Spirit; Various Manifestations; the Gift of the Spirit; as Comforter and Guide; as Convicter of Sin, Righteousness, Judgment; as Demonstrator of Sonship. The Sin against the Holy Spirit. Father, Son, and Holy Spirit.

An answer to Seventh Day Adventism.

An explanation of the signs of the Lord’s coming.

The Church and Its Ceremonies

Part 1 The Church and its Organisation.

Parr 2 “The Doctrine of Baptisms.”

Various difficult passages, such as “Baptised for the Dead” are explained.

The Creator’s Promise to Us All

The Bible gives us a large number of promises for the future but especially outlines how humans who put their trust in Jesus are able to be resurrected to eternal life and a wonderful world, free of all the problems that currently blight our planet.

The Dead: Where Are They?

The Scriptural evidence on this question. Comfort for all who mourn.

An exposition of Scripture teaching on Miraculous Healings, showing their place in the Divine purpose.

The Few and the Many: A Commentary on the Revelation

The Revelation is the last book of the Bible and was the last book written. The writer was John the Apostle, and the time of writing was somewhere about 96AD. This is a book of prophecy, and claims to be such on five occasions. Prophecy is history foretold, so we must often refer to history, both secular and ecclesiastical, to reach an understanding of what is written. Moreover, the events and developments depicted are often portrayed figuratively and symbolically, and the understandings and viewpoints suggested in the commentary are offered without dogmatism, but are offered with reasons, both Scriptural and historical, for the thoughts and interpretations suggested. Readers are exhorted to examine the commentary thoughtfully, and take from it whatever seems good to them.

The Hope of Israel

An examination of the teaching of the Bible concerning God’s dealings with the nation of Israel and the future of the Jewish people. The future of Israel as a nation, it is contended, is not one of restoration of earthly benefits and pre-eminence over other nations as believed by many Bible students, but a future on the same terms as everyone else, as the Apostle Paul explains, “There is neither Jew nor Greek, there is neither bond nor free, there is neither male nor female: for ye are all one in Christ Jesus.” (Galatians 3:28)

The Inspiration of the Bible

Demonstrating and upholding the authority of the Bible as the inspired Word of God.

What is it? Why is it expected? How is it to be brought about? Whom will it benefit?

The Parables Of Our Lord

Forty significant Parables and a large number of Similitudes are explained, or our Lord’s own explanations called attention to. His wonderful words of life come to us with renewed power.

The great promises of God for the restitution of man to his intended place in creation.

A clear explanation from the Scriptures of what the Holy Spirit is and how it has influenced men and women over the ages.

What Say the Scriptures about the Ransom, Sin Offering, Covenants, Mediator, Scapegoat?

An explanation in handy form.

When We Lose a Loved One

A single page brochure offering comfort and hope to those who are touched by a death of a loved one. A longer booklet is also available.

An explanation of such truths as the Divine origin of Jesus Christ, His relationship to God, the testimony of the Old Testament pointing to Jesus as the Messiah, His manhood, His link to Mary His mother, the parallel between Jesus and Adam, the resurrection of Jesus after His death by crucifixion, Jesus in the Revelation, and finally His example to us in every respect.

Why Believe In God?

Belief in God is a matter of faith, as the Bible tells us. This booklet puts forward reasons why belief in the God of the Bible is reasonable and tenable. Arguments for the existence of God that are advanced by eminent philosophers and thinkers are also outlined and discussed. Supporting evidence is also outlined from the scope and functions of the human mind, and its ability to appreciate order and beauty in the world around us, and in the universe within which our world is constantly in strictly regulated motion. The testimony in the Bible to God’s existence, and the testimony in the words and actions of Jesus Christ are briefly examined.

Why Believe In Jesus Christ?

“Why Believe In Jesus Christ?” provides evidence for personal belief in Jesus Christ, summarises the information about Him in the Bible and the testimonies to His existence in secular and Jewish historical writing. It provides reasons why it is of benefit morally and spiritually for all people, if they will, to believe and follow and obey Jesus Christ. This booklet complements “Who Is Jesus?”

Why Believe The Bible?

An outline of the main reasons for belief in the Bible as the inspired Word of God. These main reasons are its antiquity, its preservation, the account it gives of the origin and history of the human race, its harmony and unity, its influence for moral good, and its prophecy. The rewards for belief that God is pleased to give to sincere and careful readers are also mentioned. Jesus Christ, the Son of God, occupies a pre-eminent position in the whole Bible account.